Despite the horror movies, most ghosts that I have seen are not grotesque and disgusting after an accident or injury but often look like themselves before their death. I know this because I saw a ghost of a construction worker after he was killed by a hit and run while doing road construction last October, in the city of Albuquerque, New Mexico.

We were on our way to one of the few local restaurants that serve 24/7 for the cramming students of the local university. It’s on the main street of Central, a New Mexican place called The Gold Range across from the school.

This area of the city is my favorite, full of unique import stores, art galleries, and specialty shops, along with my favorite local joints like The Gold Range.

My dad must have been trying to cheer me up. He knows something is wrong with me. He doesn’t know that I can see ghosts. I can never tell him either because then he might send me away like he sent my grandmother away.

I hope he doesn’t find this project either. He's not technically savvy, and just uses Facebook, so I'm not worried about his discovering this. If he does, I’ll just deny it and say it's something one of my friends is doing.

Even though it was dark, around 8:30 PM, parking was tedious with the major construction being done on the two-lane roads for the new rapid transit system for the Albuquerque city bus.

The usual parking lanes were used for traffic with the roads being blocked off, and the stench of tar and concrete dust hurt my nose as we finally left our car on a side street two blocks in.

There was a lot of news about the rapid transit project because a lot of local people worried it would hurt the small local businesses to have a fast bus lane like the major cities. As it was, Central was a great place for art walks, and brewery pub crawls, but the new rapid transit system would make it hard for people even to cross the street. Now with the construction, it was downright a mess.

“I hate this construction. I wish the city listened to the people, and never started it,” I said in a sour tone as we started walking to The Golden Range.

“It’s bad for business now, but it’s gonna help our city grow in the future,” my dad replied in his gruff voice.

“How so? The construction is affecting all my favorite places. Parking has always been hell down here, but now traffic is a nightmare with the construction. I’m worried that my favorite comic book shop is going to go out of business for it too.”

“That would be a pity, but I guess we will have to buy more comics to make up for the lost business until construction is done.”

I crossed my arms. My dad must be annoyed with his hormonal teenage daughter, but he was trying too hard. I worried there was something else going on that he needed to make up for, which made my heart start racing.

The last time he was this considerate, I lost someone important to me.

My dad is a man of few words. He works long shifts as a security guard for the Air Force Base, and I’m supposed to be mature and understanding that his job is demanding, but it pays the bills.

I’m not. I hate his career because it made him distant and awkward, like many people who serve in the military or authoritarian jobs like police and security.

I’m not saying that all people who serve are like that. I’ve met ordinary people in service, but some can’t put the formality away. They are some, like my dad, who are always professional and direct. Who always put the "mission first," as he likes to say, while family and life are secondary obligations.

Anyway, it was my grandma who raised me. She had been living with us until two years ago, and I miss her. One day started getting forgetful and absent-minded. My dad noticed because he’s so adept at noticing everything, (except me seeing ghosts), so he sent her to a retirement home as soon as she started showing signs of Alzheimer's.

I’m still mad at him for that too. His reasoning was grandma would get hurt or lost while I was at school and he was on the job.

There was a day when we caught her walking from the gas station after getting the pumping started. She then left, forgetting the car with the pump still attached to the vehicle.

She lost her license shortly after that, more to do with failing an eye exam. She wasn't happy about it, but it wasn’t too big of a deal because, at that point, I had my driver’s permit. I also loved her company when learning how to drive because she wasn’t as distracting or judgemental as my dad or my friends.

Still, she wasn’t even that far gone when he made her go to the home, but now she is hardly even there when I visit her.

It was a night like tonight that he told me he had to take my grandma to the home. Now he was making me nervous taking me out to one of my favorite restaurants, and I felt both hot and cold worrying about what else was going on.

In hindsight, it had nothing to do with my dad. Only death was in the air.

Our restaurant with the wide open windows facing the street was perfect for viewing traffic and construction. I enjoyed watching the commotion of slow movement while picking at my plate of green chile enchiladas.

Traffic is usually congested around the university because of the school year, but the construction made it far worse. It was amusing to watch the frustrated faces of people in the cars, and the construction guys hurrying to get things done between the constant motions of directing people.

Even though most of the construction work happened at night, one street was roped off during the day, and only one lane was available for two way traffic at night. It meant that impatient people were waiting for their turn to move on the single road, and had to pay attention to the construction workers directing traffic.

My dad was coming back with a famous sweet roll while I was watching a construction worker move traffic cones to block the two-way road.

“Kara, I can’t eat this by myself. I know you love these,” he said as he nudged the warm plate towards me.

I was about to give him a look when we heard tires screeching and cars honking. We looked out the window and saw a white Cadillac move onto the sidewalk, and then speed by to a side street. The other vehicles stopped, and people began leaving them to where I had last seen the construction worker moving cones.

That’s when I saw him. 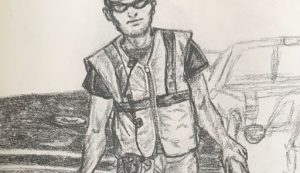 Not the body in the accident, but the ghost of a man who had just lost his life.

He was still holding onto the orange cones and looked confused. He looked like he didn't know where to go or place the cones. He just held on to them and kept walking around the area in a drunken-like stupor. Like he had just gotten off of a mary-go-round after too many rounds.

He was avoiding the spot where people were grouping around the accident. That surprised me because sometimes ghosts like to go where groups of people are.

I think he knew deep down that once he got there, he would have to put down the cones.

While I didn’t see it happen, I know the car had hit him and kept going. Even though he was wearing a helmet, the impact must have been enough to break his neck when he was thrown into the concrete barrier between the road and the restaurant.

My dad left me with the sweet roll to help with the accident. He may be cold and obligatory with his family, but he always knows what to do in dangerous situations.

I respect him for that.

It also made me realize that while I don’t like his job, someone has to do it, and he’s pretty good at remaining calm in bad situations. He could also have worse jobs. He had worse when he was active duty in the U.S. Army.

While he says he can’t really talk about what he does, I know his current security job is relatively safe. Probably safer than the construction jobs these guys endure at night.