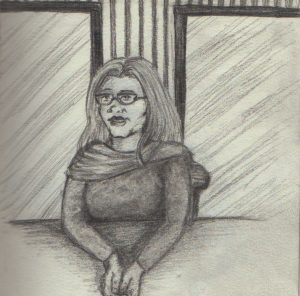 I’m sorry it’s been a while since I posted.  There were a lot of things that happened over the last month, and I needed to take care of myself and hide for a while.  The end of summer was not fun and games. It was full of daycare work, loss, and stalkers that I’m trying to stay away from.

I got freaked out when someone started following me, and I thought it would be best to stay low.

It’s not a ghost that I’m afraid of.  At least, I don’t think she is a ghost.

It’s an older woman with long white hair and glasses. She doesn’t look dangerous, but she worries me because she seems to know about me seeing ghosts, and I worried this blog may have gotten her attention in a way I didn’t want to get attention.

The week before school started is the first time I noticed her.  I was drawing at my usual coffee spot where I usually encounter the coffee girl ghost.  This is the same ghost that I have been trying to get to interact with me but usually disappears whenever I get close.

This time, the coffee girl ghost not only reacted to me but to this weird, old woman.  Her hair long white hair is soft and billowy like cobwebs, and she was odd wearing a long skirt and a sweater that is too hot for the summer season.

At first, I didn’t pay too much attention to his old woman.  I’m used to people noticing me or watching me as I draw. People find creation interesting, but instead of praising my drawing or striking up a quick conversation, she just stood over me for a few minutes and watched me start drawing a new portrait of the coffee girl ghost.  I had only drawn outlines so I could refine her features once she appeared.

Her quiet observation didn’t bother me because I prefer not talking to people while I draw.  Sometimes, people will even apologize for distracting me. I don’t mind the small talk of a quick comment, and most people don't mean to bother me.

She said nothing though, and then just sat down across the cafe and continued to observe me, drinking what looked to be tea from an actual teacup from the cafe rather than a paper cup.  It’s obvious her intent was to stay for a while.

When the coffee girl ghost made an appearance, she had her same sweet and shy smile, until she noticed the woman.  Her facial expression changed from her shy smile into wide eyes looking at disbelief and terror.

This surprised me, as the only person I have seen this ghost interact with is me, and because she knows that I can see her.

The distressed coffee girl ghost motioned at me to leave by waving her hands.  Why was she signaling to me? I felt my heart jolt with panic as I have never seen a ghost do this before.

Why is she afraid of this woman?  Is she warning me about her?

The woman’s expression changed too, as she watched my reactions from the ghost.  She was also looking past me and directly at the ghost, which means that she must see ghosts too.

I quickly left, feeling her eyes following me as I rushed out the door, but it didn’t end there.

The next week, I saw her at my school.  She was there watching me as I left school last Monday when I had to ride the city bus home. For the first time, I was thankful for my dad’s paranoid parenting about taking alternate routes home to throw off stalkers so they don’t know where you live.

I rode the bus to a grocery store and hid in the aisles until I lost her.  Then I grabbed another ride from the city bus to lose her.

I’m wondering if I should tell my dad about her, but I don’t want him finding of about this blog.

What do you think I should do?

The first ghost I remember is that of my mother, the woman in white here. 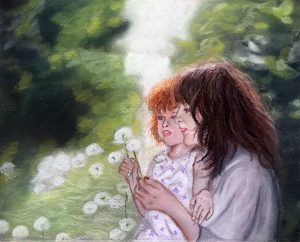 I have seen them for years, ever since my mother died when I was seven-years-old. When cancer rotted her inside and tore her away from this world.  During her last years alive, she was bedridden and attached to a machine. My last memory of her was when I knew she was inside her bedroom, sleeping soundly, but I saw her in our yard.

I was playing in the backyard after a rain.  Snails peaked out of the garden, and I was having fun collecting them into piles and giving them lettuce from the fridge.  Trying to take care of something I could have control over.

After I grew tired of the snails, I noticed the unusual amount of dandelions that had seemed to spout after the rain.  It was so strange because they weren’t the yellow flower dandelions, but the white billowy seed dandelions that should have dissolved after the rain.  They were my mother’s favorite, and she used to have me pick them for her and blow them to make wishes. I wondered if I should pick a few and wish for my mother to get better.

And then I saw her.

Instead of the bald head, I was so used to, she had long locks of golden brown hair that swayed on her shoulders.  She had a deep smile full of life, and bright eyes as light and lively as the blue sky above.

At first, I didn’t know who this woman was.  She was so beautiful and lively in her white summer dress.  She motioned for me to come closer, and I was afraid for some reason.  Not just from the fear of interacting with a stranger, but something didn’t seem right about her either. Despite the warmth of the humid air after the rain, and the warmth of the sun on my skin, I felt cold from the unnatural breeze that came from her direction.

Her smile turned after realizing I was scared to draw near her.  She tried to keep it, but I noticed tears come from her eyes as she started to fade.  It wasn’t like she was disappearing from me, but was going somewhere else. It’s hard to explain.  She was both there with me, and moving at the same time, even though she stood in the same place. All I knew was the feeling she was moving away, and that was when I heard my father yell.

“No!  Don’t leave me, Joe!  My Josephine...” I heard him sob from the open window by the dandelion grass my mother stood on.

I ran inside, and overheard our hospice nurse on the phone, calling for an ambulance to take my mother away.  When I finally had the courage to return outside, both my mother and the dandelions were gone.

I painted this picture to not only remember her but to remind myself of what I missed.  I could have had one more moment with her, blowing a dandelion to make a wish.

It's not easy to share something this intimate, but I'm tired of being alone in what I see and experience.  There are more stories to share than just my own.